Last night I was using our family laptop. I Googled something and noticed the Moog Synthesizer “Google Doodle”. It was amusing and I played it with it for a few seconds. I fiddled with some of the switches and pressed some of the keys, listening to the awful resulting noises. I fiddled with a few more switches (not having a clue what I was doing since it had no documentation) and clicked one of the keys. I heard a loud, high-pitched popping sound that jolted me and I freaked out because I thought that something in our still-new (four-months old) laptop had burst.

I listened and smelled for any warnings signs and found none. I clicked a few more keys on the doodle keyboard and found my fear realized: there was no sound. I opened the Windows Run dialog and pressed Alt+A (a quick, easy, and reliable way I always use to test sound) and heard nothing. I ran a game I had just been playing and again heard nothing.

The Google doodle had blown the little speaker in our laptop.

Google recently added the Everything Sidebar to (the left of) its search results page, causing the actual results to shift to nearly the middle of the screen. It seems that most people agree that it is not very useful and is very distracting and design-wise, is quite a failure. Google doesn’t seem fazed by the negative response and left it in anyway.

Ignoring the suggestions and performing a search on the basic query returns honest results. Every single one of the results on the first page (and likely the next several pages) is about getting rid of the sidebar. Here’s a screencap (the highlighted terms were added afterwards to quickly show that every single result is about removal of the sidebar). 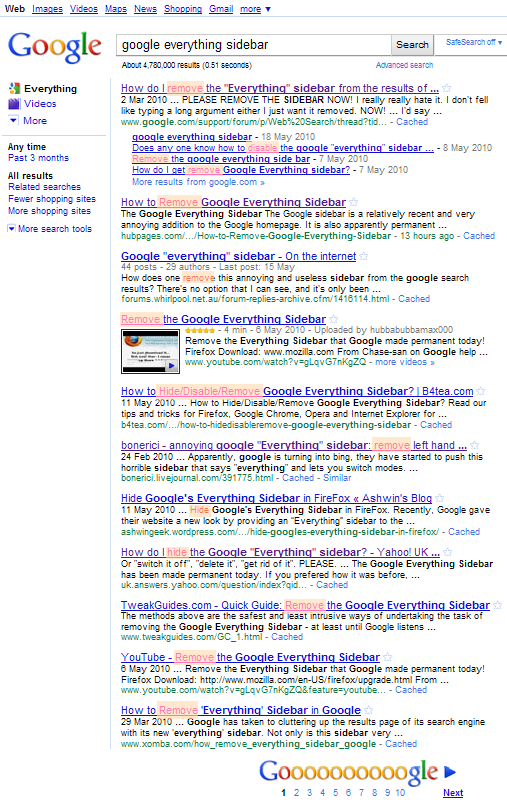 I’d say that Google should take a hint from their users and get rid of the sidebar since that is clearly what everybody wants, but it seems that they already know it; they just don’t care.