It’s no secret that Hollywood is loathe to do anything novel and is obsessed with remakes, but they also make “new” movies by recycling plots as well, even if they’re not direct remakes. But they’re so loathe to do anything new, that they’ll even go so far as to reuse the same actors when they recycle plots.

In 2003, Dennis Quaid starred in the movie Cold Creek Manor, in which he played a man who bought a house that was foreclosed on by the bank and seized from Stephen Dorf’s character, but Dorf’s character wouldn’t accept it and refused to leave and terrorized the new owner and his family.

In 2019, Dennis Quaid starred in the movie The Intruder in which he played a man who sells his house to a man (played by Michael Ealy) and his wife, but then refuses to leave and terrorizes them.

I expect Michael Ealy to star in a movie in 2035 as a man who refuses to leave his old home and terrorize the new owners. ¬_¬

It’s interesting that Epic Games and 3D Realms (formerly Apogee) were made by Tim Sweeney and Scott Miller respectively who each started out by making the very similar ASCII DOS games ZZT and Kroz respectively.

Too bad for 3D Realms that they diverged so much later (mainly thanks to George Broussard’s unrestrained OCD).

The Weeping Angels from the “Blink” episode of Doctor Who (June 9, 2007) instantly became one of the most iconic characters on the show, almost on par with the Daleks and Cybermen. They’ve been pretty popular and referenced in all kinds of other media since then. However, the game Condemned: Criminal Origins did that same concept two years earlier (November 22, 2005). At one point in the game, you investigate a derelict store and come across a bunch of mannequins which move when you turn your back on them.

No doubt there have been other similar creatures imagined before the mannequins in Condemned. The concept is hardly unique or extraordinary. Feel free to mention some older ones in the comments.

This adorable looking fan-heater looks kind of like a Pokémon or something. Too bad it’s a terrible fan whose knob literally melts. ¬_¬ 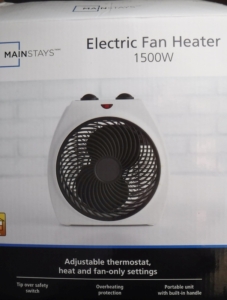 It’s weird to think that most of the years that people used to think of as the future have already passed. The year 2000, 2001, and 2010 all came and went already, and still no jetpacks or flying cars. The year 2020 is the last “future” year that most of us will experience in our lives; the next futuristic sounding year won’t be until 2050, then 2100. (I damn well better be in a relationship by then; I better not still be alone at 122. ¬_¬)

It’s hard to believe we’re just a few hours away from a whole new decade; they don’t happen too often, maybe only once every few years or so.

Maybe it’s that most Minecraft players are too young to know about it, or that the show was Canadian, but something that’s always baffled me (“always” meaning the better part of the decade) is that, as far as I can find, nobody seems to have noticed that the villagers in Minecraft look an awful lot like the aardvarks in the show The Raccoons:

You can get RGB LEDs that look like a regular LED but contain a red, a green, and a blue LED in one. The individual LEDs tend to be extra-small to allow all three to fit in a regular LED. These RGB LEDs allow you to emit any of the three colors or three combinations or white (and even more colors by adjusting the amounts of the three primaries). However, even though the RGB LEDs are supposed to be a single component, the fact is that they contain three separate LEDs which of course, are not in the same place. You can see their separate positions by casting their light on something close to it.

I don’t think there are any “true” RGB LEDs. There do exist LEDs that are true yellow, orange, purple, cyan, etc. and emit an actual wavelength of that color rather than combining additive-primaries, but they are static and can’t be adjusted to different wavelengths. That’s probably not even possible. YouTuber StyroPyro has lasers of different wavelengths like yellow or cyan. There are even, variable-wavelength lasers.

I have 38 cartons of ice-cream now and all three freezers are completely full. If I had or could make more room, I’d get four more cartons because ice-cream truly is the ultimate answer.

I needed some rubber bands recently, so I dug out a bag of rubber bands I’ve had for several years. Unfortunately, they weren’t very usable because they had melted! I know it can get very hot and humid in the summer, but what the actual heck‽ What a waste. :-\

In one of the photos, you can still see one band is almost normal. On the other side, it’s all completely flattened. 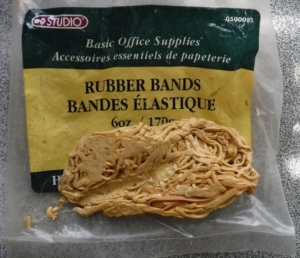 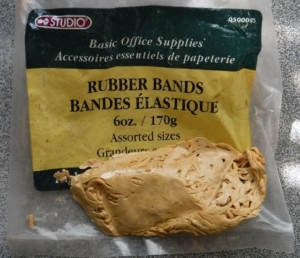