Interesting how the same kind of product can use completely opposite taglines to promote themselves. 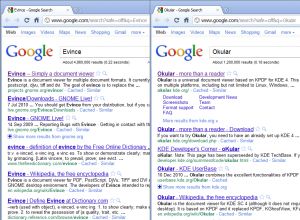 Recently I was using some software and I realized how glad I was to have it. I figured I would compile a short-list of the best, most useful, indispensable, and free software. While there are other programs that perform the functions that these applications do, these ones are the best of the best and are my go-to apps that I find myself using over and over.

(1) One application that is valuable for a computer is Sysinternals’ PageDefrag. Configure it to run on each boot (using up only a few extra seconds) and it will always keep your most important files (the registry) in one piece, making your system run more efficiently and giving you a better change of recovery if they somehow get deleted.

(2) By default, the Size column in Windows Explorer does not show the size of folders, only of files. Also, there is no built-in column to display the number of items inside a folder. Brian Oraas took it upon himself to fill in this gap in the Windows UI by writing FodlerSize. It installs a configurable column-handler that shows the sizes of folders (and files) as well the number of contained items. It allows you to configure the unit of display and to enable or disable its function in various types of media (eg turn it off for slow CDs, etc.)

(3) As a software developer who specializes in reverse-engineering proprietary formats to write applications that allow users to have more control over their systems that is provided by default, Lars Hederer’s program NTREGOPT is a favorite. The Windows registry is very similar to a file-system and as such, it gets fragmented over time due to repeated deletions and activity, that is, it ends up growing and containing unused space. While PageDefrag physically defrags the registry files on disk (so that they exist in one consecutive block), NTREGOPT logically defrags the registry by dumping a new copy that contains only the current entries, thus shrinking the registry files by omitting the space formerly used by now deleted entries. Unlike PageDefrag, this should only be run once in a while since it can take a long time with a large registry and the bloat occurs slowly over time anyway, so the wasted space is small for a while after defragging.

(4) When you do a lot of downloading, over time duplicate files becomes a problem. There are many duplicate-file-finding applications, but most fall short. One of the best offerings is CloneMaster from SoftByte Labs. The current version is too much like other programs, but version 2.19 if you can get it is terrific. It has a small footprint and allows you to quickly and easily search for duplicates. Its search algorithm is pretty efficient (even for content, aka byte-wise comparisons) and the results interface is easy to use, making this program a choice selection for weeding out duplicates.

One of the biggest shortcomings of DFF programs is that when they compare files by content (byte-by-byte), they only find exact matches, not near matches. While there are a few DFFs that perform this sort of search, they are all pay-for programs that generally don’t work as well as would be hoped. (I’m investing several content comparing apps that find duplicate graphic and audio files by basically decoding the file and comparing its contents, regardless of the actual bytes, eg same song in different formats or bitrates, same picture in different formats or resolutions)

(5) People who download a lot of MP3s (especially from P2P networks), tend to end up with multiple copies of songs from different sources. A lot of the time, they will end up being duplicates, but because the data in the ID3 tags is different, normal DFFs won’t detect them. I looked everywhere for a DFF that could compare MP3s but ignore the tags. I found two, but they would either not work correctly or would crash. I gave up and decided to write my own (as usual). I got well underway with the design when I found AllDup by Michael Thummerer. While I still use CloneMaster for quick, small duplicate searches, AllDup is now my go-to app for doing large scale checks. Whenever some time has passed and I have downloaded a lot of files since the last check, I will run AllDup on all of my partitions to find any and all duplicate files. With its various filters, I can narrow the results down to focus on duplicates that I really need to delete (apps, games, and OSes tend to have duplicate files). AllDup’s results screen is also very easy to use yet powerful, making it a snap to select and process the files. Best of all, AllDup has the ability to compare the actual audio contained in MP3 files and ignore their ID3 tags, making it great for weeding out those duplicate songs downloaded from P2P apps. Also, Michael is extremely responsive to bug reports and feature suggestions to the point that if you let him know about a way to improve the program, he will email you a beta copy of it with the fix implemented soon after.

(Now I just need to find a DFF that can detect identical images while ignoring their EXIF data.)

(6) While the preceding programs were all freeware, I simply have to include one pay-for program. There are plenty of hotkey applications out there, but the best and most powerful, yet easiest to use one that I have seen is Mario Knok’s Hotkey Master. Sure programs like AutoIt and AutoHotkey are more configurable and can do even more, but they are more suited for programmers than the average user. Hotkey Master on the other hand is very easy to configure and set up hotkeys that can do almost anything the user could need with a point-and-click interface, while still having a scripting language to allow more advanced requirements. Once you set up a bunch of hotkeys to automate various tasks from entering chunks of text to changing the volume to performing repetitive cursor movements, you will wonder how you ever got on without hotkeys (not to mention the time you will have saved).

(7) Finally, I throw in a game. I’ve got several small, casual, quick, hit-and-run games that I use to fill in a spare minute here and there (great for when you are bored between tasks). However, the one that I inevitably end up going back to over and over and over and over again is Russell Sasamori’s tangram-like Snug. It is very simple and easy to play, yet can sometimes be surprisingly difficult to solve. My favorite thing is to keep an eye out for those rare pieces with the double unit stick hanging off the end. My only complaint is that it unnecessarily too CPU heavy (not a lot, especially on faster system,s but still more than it needs to be…) And don’t forget to use the level menu; you can choose either 5-piece or 9-piece mode. (I have thought long and hard on how to write a program like this—the creation of the puzzle pieces and the detection of a solve—and have always ended up with the determination that it would require the use of those irritating algorithms and such from those advanced-math-for-computer-science courses that few people like, so good on Russel.)

If I notice any other apps that I use constantly and am thankful to have, I’ll add them to this list.

I was just helping someone on the Microsoft news server disable their Windows keys using this registry patch: