Social networks have exploded with a rash of photos that people, girls—surprisingly often attractive ones—in particular, post of themselves, often in their underwear. They tend to be of the variety in which the subject (read she) is holding their camera-phone up and taking a photo of herself in the mirror or holding the camera out as far as they can and taking the photo of themselves.

What people don’t seem to realize is exactly what these (pretty dumb looking) photos mean: the girls have nobody to take the picture for them.

It could be argued that they are taking the picture themselves because it’s kind of private what with them wearing just underwear, but then again, they can’t exactly be shy since they are posting these photos on the Internet for the whole world to see. It could be rebutted that they are more comfortable with having unknown strangers seeing these photos than they are with having an actual, live person seeing them in person. Really‽ If that is the case, then I suppose it explains why so many actresses are so willing to do nude scenes, even knowing what fat, hairy men around the world are doing to those scenes. Finally, it could be counter-pointed that they are not posting the photos for everybody to see, but rather only a select group of people (who exactly‽). If that were true, then why are so many of these photos available consolidated on so many blogs? Perhaps these girls just don’t know how to set the privacy of the photos? Either way, do their camera-phones not have a timer function?

It’s pretty likely that a lot of these girls simply have nobody to hold the camera, which means that not only do they probably not have a boyfriend, but they must not even have a girlfriend that they trust and are comfortable with. It does make sense to a degree though since people who are introverted and relatively lonely are often the ones who go (too far) all out on-line.

Also, do they not have a plain wall, like in the bathroom or hallway, to take the picture against? Do they have to take it against a cluttered, background showing their messy rooms?

I saw this comment on a MySpace page and it just made me sad. 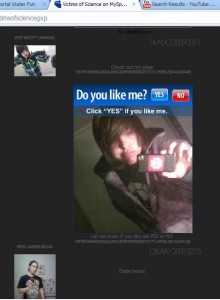