I just checked Super User and noticed that I had broken 19K rep. I checked my profile to see which of my questions/answers was upvoted and noticed that someone had apparently gone on a tare.

It seems that someone saw one of my questions or answers and really liked it, then looked at my profile and saw my other questions and answers and decided to upvote a bunch of them. I’ve seen this happen before (someone even went so far as to create a profile with the name SynetechFan) but never to this extent. I just hope that it isn’t seen as some sort of suspicious activity and subsequently deleted (everybody seems to be vulnerable to backfiring good intentions; especially my mother).

What’s particularly interesting is that whomever did it stopped at 40 upvotes, that’s 200 rep which happens to be the Stack Exchange daily rep-cap, meaning that had they done one more, it would have been recorded, but not applied (i.e., I would not have gotten any more points). What’s particularly odd is that they upvoted only questions which are worth five points as opposed to answers which are worth 10 (which would have meant only 20 upvotes before hitting the cap). I can only deduce that the person who did it is not a novice and is familiar with the Stack Exchange sites, but there is no way to send private messages and the user-facing logging functions are limited, so there is no way for me to know who did it or why.

Either way, I’m not complaining. 🙂 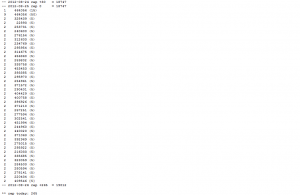