I was recently debugging an AutoHotkey script I was writing for someone on Super User. I was testing it in a copy MSPaint and at one point, I noticed that I happened to somehow draw a perfectly straight right-angle as seen below. You’ll also see numerous attempts  (some close, but all failed) to repeat it on the right. I’m reminded of the Seinfeld episode “The Handicap Spot” in which Jerry draws a perfect, freehand isosceles triangle on a napkin. (Apparently Kramer likes the word ‘isosceles’ so much that if he had a child, he would name it Isosceles Kramer.) 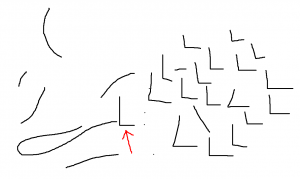