In our household, we haven’t made a jack-o-lantern since we were children (and even then, only once or twice out of curiosity and not missing out on a tradition). We don’t like to make jack-o-lanterns because the idea of cutting up a pumpkin (which is food), letting it rot for a few weeks, then throwing it in the garbage is anathema to us.

We often forgo real pumpkins in general, instead favoring plastic or foam ones, but for the past few Halloweens we have gotten a real pumpkin, left it uncut, put it on the porch as decoration, then after Halloween turned it into a pumpkin pie (which I was surprised to learn a few years ago is awesome!).

Last year, the local squirrels took a couple of nibbles out of the pumpkin out of curiosity but left it alone. We cut a chunk out of the nibble areas and pied the rest.

This year, we got a few small pumpkins and put them on the porch as decoration. There were four or five little pumpkins of various shapes, sizes, and colors. It was pretty nice.

Here’s a few of the pumpkins, and as you can see, one of them has not been touched, one has a sort of abstract looking miserable-ghost look to it, and one has a legitimately sinister look which is very amusing; too bad it doesn’t have a fang-y mouth, maybe the squirrels got bored and gave up. 🙂 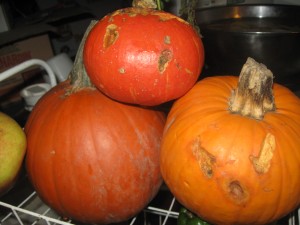 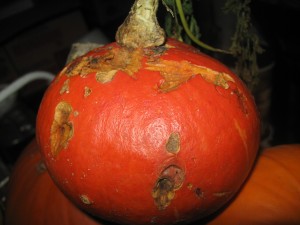 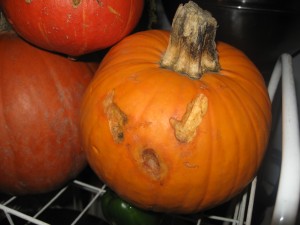 A lot of people say “grace” or other form of prayer before eating. This usually takes the form as a thank-you to God for providing them with food to eat.

I grew up with the simple Persian prayer Besmelah which means in the name of God. It’s mostly just a way of keeping God in mind. When eating, I generally say one of those for each animal that I’m eating as a way of acknowledging that an animal is dead so that I can eat and hoping that there is an afterlife and the animal is in heaven. There’s only a few simple rules I use:

Some religious people may be offended that I don’t specifically thank God, but I think that thanking, apologizing to, and hoping for the best for the animals who died makes more sense. It’s the least we can do. Also, because the grace I say is a single word (the meaning and intent matter more than the syntax), it is efficient to do it this way. It’s only fair.