During the end-credits of the game Portal, there is a series of ASCII art images displayed along with the great song “Still Alive”. Most are relatively easily recognizable, except the following one. What the heck is it? It almost looks like one of those yule-log cakes or jelly-rolls. Mmm… 😋 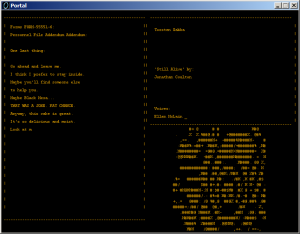 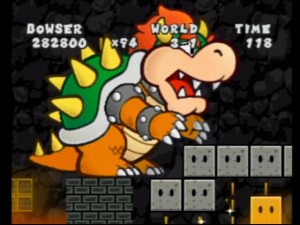 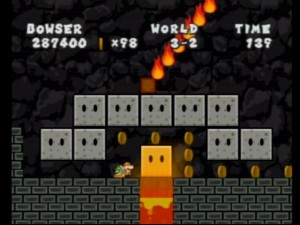 In one year of high school, we learned the Turing programming language. One of my classmates found a violent hang-man game made in Turing on the Internet. It was quite the hit in our class for several reasons. Unlike most of our own apps/games, it had graphics, and good ones too: it used pre-drawn TIM files instead of simple vector drawing (like my tic-tac-toe game, which to be fair wasn’t too bad at all). It also used the mouse for input. Neither of these were part of the course, and the mouse wasn’t even in the text book—school has a tendency to focus on boring fundamentals instead of the fun stuff. 🙁 Plus, it had all that violence (there were a few Mortal Kombat-style ways that the character would die, prompting us to try to lose more than win).

Anyway, I did not get a copy of it, and have looked everywhere but cannot find it. Does anyone know where I can find it? I think it had the filename BLUDBATH.ZIP or something like that.