The idea that ghosts can haunt and torment the living is absurd and logically impossible.

Nobody knows for sure what lies after death, but there are two commonly accepted possibilities; either there is or is not an after-life:

Dr. Oz discussed the film Contagion with the filmmakers. One thing they discussed is how a virus can spread quickly and thoroughly amongst a population. Before that, the MythBusters did an experiment to visualize how much a virus can spread at a simple dinner party and how to minimize the spread. The experiment used a clear liquid that could be seen under an ultra-violet light.

This is an obvious technique; to use a paint or dye of some sort to see who and what is “infected” after some time. Now one might think that the spread is not as bad as virus movies would make it seem because “patient zero” may have a large amount of the virus in them, but each time they contaminate someone, they pass off less and less. As well, each contaminated person is naturally less contaminated than the person that infected them, and so passes on less and less of the virus such that at some point, only minuscule amounts are being transferred.

Imagine one person holding an unsliced loaf of  bread, and each time they pass someone, they rip off a chunk and give it to them, and those people do the same. At some point, people will be passing on mere crumbs.

This seems somewhat of a relief to know that the amounts drop off, and if you get infected later on (eg, by trying to stay clean as long as possible), you would be getting little enough to be able to fight it off. Unfortunately, while this is indeed the case for things like paint or bread, it is not true for bacteria and viruses because infections reproduce. You may only receive a small amount of a virus or bacteria, however they will reproduce inside you and increase their numbers, so that when you pass it off to someone else, you give them about as large a dose as anybody else, not less. Unfortunately, attrition does not apply to viral or bacterial spread.

Pursuant to an argument at this Super User question, I have done some testing and written a test program to try to clarify the situation with current-working-directories.

As Raymond Chen explains, per-drive CWDs have been around since DOS, which makes sense because DOS’s only interface was the command-line. He goes on to explain that in Windows, the command prompt keeps track of per-drive CWDs by using environment variables.

The point is that while the actual manner in which they are tracked may differ, there are per-drive CWDs in all Microsoft operating systems from DOS, up to Windows 7. This can be easily demonstrated with the following program (adjusting drive letters and paths as appropriate).

This program shows that the CWD is maintained for each drive in DOS, Windows XP, and Windows 7 as seen below. 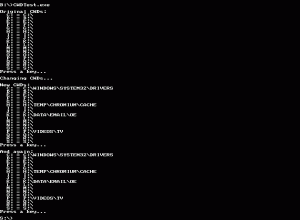 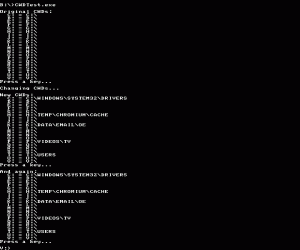 It is no surprise that there is no record of a hostage situation ever working out for the bad guys. The fact is, it is for all intents and purposes impossible for that to happen. When criminals take a hostage, be it a whole room of them such as in a bank robbery, or a single one as a human-shield, it cannot work out for them for several reasons.

When they take a room full of hostages, the police eventually surround them (they probably already have, otherwise the criminals would have tried to escape instead of taking hostages). Once surrounded, there is no hope for the criminals because it is not like the police will just give up and go home; they will stay there as long as it takes and if need be (eg the bad guys actually get their fast car or airplane), follow the bad guys wherever they go on the road or in the air.

If they take a single person as a human-shield, then they are in a logic-loop that always ends in their losing. They cannot kill the hostage because if they do, the police are then free to instantly shoot them (they would not bother to arrest them at this point, the bad guy is dead). If they do not kill the hostage, then their threat is meaningless and the police could just as well just approach and arrest them.

Yet, bad guys continue to take hostages, thinking that they are smart and can find a clever way to make it work. For example, they may blackmail the chief of police or something, as though everybody would just stand down and allow the criminals to go free just because one person is being pressed.

A hostage situation is basically a tautology that always causes the bad guys to lose, either getting arrested or killed. It may make for exciting fiction, but in real life, there’s a reason there has never been a case of it succeeding.